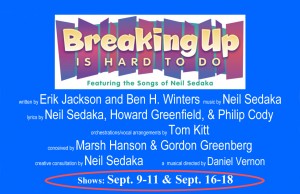 Breaking Up is Hard to Do

Set at a Catskills resort in 1960, this is the sweetly comic story of Lois and Marge, two friends from Brooklyn in search of good times and romance over one wild Labor Day weekend. The score showcases 18 Neil Sedaka classics, including “Where the Boys Are,” “Sweet Sixteen,” “Calendar Girl,” and, of course, the chart-topping title song. 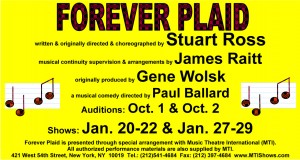 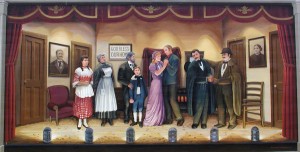 Gold in the Hills, the Guinness Book of World Records longest-running show, has played since 1936. Set in the 1890s, it has a relentless hero, a winsome heroine, a ruthless villain, and the wilder side of city life in the infamous New York Bowery.

There will only be one opportunity to see these original works, written and rehearsed in a 24-hour period by the area’s best talent.

by Larry Shue
a comedy directed by Jim Miller

At a fishing lodge in rural Georgia, a British mercenary’s pathologically shy friend avoids conversation with strangers by pretending to be from an exotic foreign country. He overhears more than he should…